Scott Hochberg is a public policy consultant, software developer, and university lecturer. He is a former member of the Texas House of Representatives, where he served with distinction for twenty years. Mr. Hochberg served as a member of the House Committee on Public Education for his entire career in the Legislature, and is well-respected by members on both sides of the aisle as an expert on education policy and school funding.

After his legislative career, Mr. Hochberg was appointed by Houston Mayor Annise Parker to chair the board of directors of the Houston Forensic Science Center LLC, where he led the transition of the Houston crime lab from a division of the Houston Police Department to an internationally-accredited independent agency.

In his legislative service, Mr. Hochberg represented southwest Houston from 1993-2013. He was elected from two different districts, starting in a district that included the Texas Medical Center, Rice University, the Astrodome, and communities that included Meyerland, Hiram Clarke, Southampton, Southgate and Fondren Southwest. After redistricting in 2001, Mr. Hochberg served a district that included Gulfton, Sharpstown, Briarmeadow, Shenandoah, Piney Point and nearby communities, which was then the most densely populated district in the state, and one of the most diverse.

In addition to the Public Education and Appropriations committees, Mr. Hochberg served as Vice-Chair of the House Committee on Corrections and served on various other committees of the House and joint House-Senate committees, and .

Among many honors, Mr. Hochberg was recognized twice as one of Texas' "Ten Best Legislators" by Texas Monthly magazine. He was named "Best Local Democrat" by the Houston Press.

Mr. Hochberg was honored with the Anti-Defamation League's Milton Popkin Award, given for "exceptional leadership in furthering ADL's mission to promote respect for all", in recognition of his leadership in religious freedom and church-state separation issues.

Mr. Hochberg's work on the Public Education Committee included passage of a parents' bill of rights, funding for second-chance high school classes during evenings and weekends, additional school district performance audits, the state's first program to fund school building construction and renovation, and the creation of a medical safety board for student athletes. His many awards from education groups include being honored as a "Legislative Hero" by the Texas Freedom Network, Legislator of the Year by the Texas PTA, and a Champion for Children by the Equity Center.

Mr. Hochberg was recognized by Mothers Against Drunk Driving for his successful effort to lower the state's DWI alcohol level to .08. He also passed legislation to make it easier to close bars and nightclubs that become crime havens.

Mr. Hochberg led a successful effort to hold polluters responsible for unplanned air pollution caused by poor maintenance. An advocate of open government, he led in the effort to post all legislative actions and state agency rules on the Internet. Mr. Hochberg also served ten years on the Judicial Committee on Information Technology, which coordinates efforts to modernize the Texas court system. 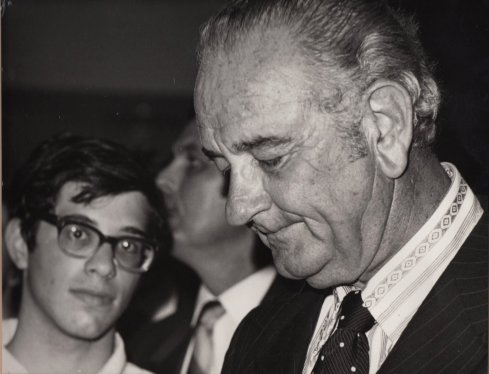 Scott meets President Lyndon Johnson, October 16, 1971.
Dedication of Sid Richardson College, Rice University
Photo by Wayne E. Baisley
Mr. Hochberg was born in Houston but grew up in the Chicago suburbs. He returned to Houston to attend Rice University, where he earned his Bachelor of Arts in Electrical Engineering and Political Science, and his Master in Electrical Engineering degree.

After Rice, Mr. Hochberg co-founded a firm to design and manufacture audio equipment for the broadcasting industry. He headed that company for twelve years before selling his interest.

He currently serves as an education policy consultant to various clients including Rice University's OpenStax open textbook project, lectures at Rice on education policy, and operates a software development company.

Mr. Hochberg serves on the board of the Anti-Defamation League Southwest Region. He has served as president of the board of Houston Taping for the Blind and as a trustee of the Citizens' Environmental Coalition. Mr. Hochberg is a graduate of Leadership Houston.

Mr. Hochberg is married to Victoria Ford. The couple splits their time among Austin, Houston and Durango, Colorado.